Earhart was born in Atchison, Kansas.  As a teenager, Earhart kept a scrapbook with clippings about successful women in law, advertising, management, mechanical engineering, and film direction and production.  At the time, those fields were dominated by men.  On December 28, 1920, Frank Hawk gave Earhart a ride in an airplane that inspired her to learn to fly.  She recalled her experience, “By the time I got two or three hundred feet off the ground, I knew I had to fly.”

​In 1921, Earhart’s first flying instructor was Anita Snook.  In 1922, Earhart bought her first airplane and set an altitude record (14,000 feet) for female pilots.  In 1923, she received an official pilot’s license 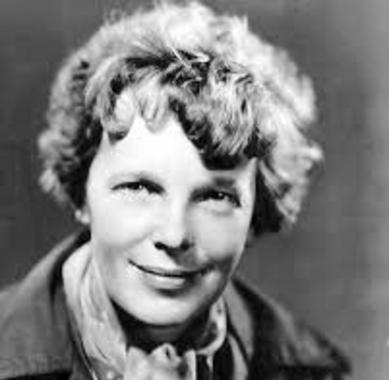 In 1928, Earhart was offered the opportunity to be the first woman to fly across the Atlantic Ocean as a passenger.  On June 17, 1928, pilots Wilmer Stultz and Lou Gordon completed the trans-oceanic flight in 20 hours and 40 minutes with Earhart as a passenger.  The feat was the subject of her first book, 20 Hours and 40 Minutes: Our Flight in the Friendship.

In 1929, Earhart helped to organize a trans-continental air race, called The All-Women Air Derby, in which she placed third.  The race was from Santa Monica, CA to Cleveland, OH.  Later that year, Earhart became the first president of The Ninety-Nines – a group of 99 female licensed pilots interested in growing the number of women pilots and supporting those already involved in aviation.

On her historic transoceanic solo flight in 1932, Earhart departed from Newfoundland, Canada and landed in a farmer’s field in Londonberry, Northern Ireland nearly 15 hours later.  Her accomplishment made her a celebrity.  New York City welcomed her with a ticker-tape parade.  For her trans-Atlantic flight, Earhart received the U.S. Distinguished Flying Cross from Congress, the Cross of Knight of the Legion of Honor from the French government, and the Gold Medal of the National Geographic Society from President Herbert Hoover.  She was also recognized in cities around the world, including Rome, Paris, London, and Washington, DC.  Later that year, she succeeded in crossing the United States, leaving from Los Angeles, CA and landing in Newark, NJ in just over 19 hours.

In 1935, Earhart became the first person (not just the first woman) to fly solo from Hawaii to the continental United States.  The trip covered 3,875 miles.  Several pilots had lost their lives in attempting the same feat.

Earhart lectured on aeronautics as a visiting professor at Purdue University.  In addition, Earhart published the book, The Fun of It, a memoir about her flying experiences.

During her career as an aviator, Earhart accomplished the following records:

In 1937, Earhart set out to fly around the world via an eastbound route beginning in Oakland, CA.  Records show that she covered 22,000 miles in 28 days before landing in Lae, New Guinea.  Earhart is thought to have lost her life while flying between New Guinea and Howland Island, a small island in the Pacific where she planned to refuel.  An extensive search did not reveal her body though there is a great deal of mystery surrounding the circumstances of her death.