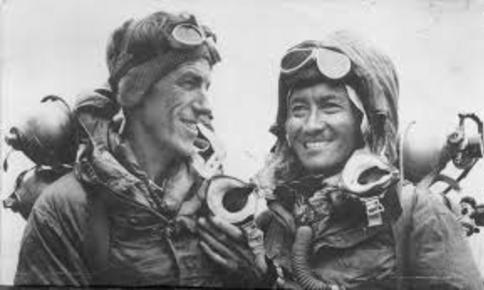 Sir Edmund Percival Hillary was the first man to reach the summit of Mount Everest.  He also reached the North Pole and the South Pole.

Hillary was born in Auckland, New Zealand in 1919.  At sixteen, he was part of a school trip up Mount Ruapehu, which showed him that he was stronger and had more endurance than his peers.  His first major climb was of Mount Ollivier in 1939.  Hillary studied mathematics and science at Auckland University College and later became

a beekeeper, which allowed him to climb during the winter.  Hillary served briefly in the Royal New Zealand Air Force beginning in 1943.

In 1953, Hillary was selected to be part of the British expedition up Mount Everest.  During the Everest expedition, Hillary plotted a route up the Khumbu Icefall.  On the morning of his summit attempt, Hillary had to unthaw his boots, which had frozen solid.  After passing what is now called Hillary’s Step on May 29, 1953, Hillary and Tenzing Norgay reached the summit at 29,028 feet at 11:30 am each with 30-pound packs.  The pair spent only 15 minutes at the summit documenting their achievement with photographs before descending.  He was quoted as saying, "It's not the mountain that we conquer but ourselves."

Hillary climbed ten other peaks in the Himalayas.  In addition to the Mount Everest climb, Hillary reached the South Pole and the North Pole, becoming the first person to successfully reach the summit of Mount Everest and the poles.  His trip to the North Pole was by ski plane with Neil Armstrong, famed astronaut who was the first human to walk on the moon.

Hillary was also a philanthropist and diplomat.  He established the Himalayan Trust and helped Sherpa communities by building schools and hospitals.  Hillary wrote 12 books and served as New Zealand Ambassador to Nepal and New Zealand High Commissioner to India and Bangladesh.