flight test for a commercial license.  She later received a pilot’s license in 1943 from Pal-Waukee Field in Illinois.

With Willa Brown (also profiled on this site), Bragg was active in the National Airmen’s Association of America in advocating for more African American pilots in the military.

Bragg bought three airplanes in her lifetime.  She continued to fly into the 1970s often logging cross-country miles.  Bragg’s autobiography, Soaring Without Setbacks, with Marjorie Kriz was published in 1996. 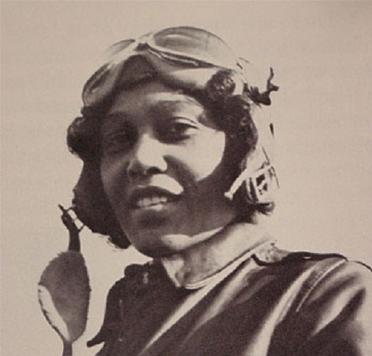 Janet Harmon Waterford Bragg was born in Griffin, GA.  She attended Spelman College in Atlanta and became a registered nurse before moving to Illinois.

In 1928, Bragg became the first African American woman to enroll in the Curtiss-Wright School of Aeronautics in Chicago.  In 1934, she enrolled in Aeronautical University, a school managed by John Robinson and Cornelius Coffey.

​Bragg applied to join the Woman Air Force Service Pilots but was denied on account of her race.  She later enrolled and completed the Civil Pilot Training Program at the Tuskegee Institute (the training ground for the famed Tuskegee Airmen portrayed in the movie Red Tails) but was denied a pilot’s license in Alabama despite passing the