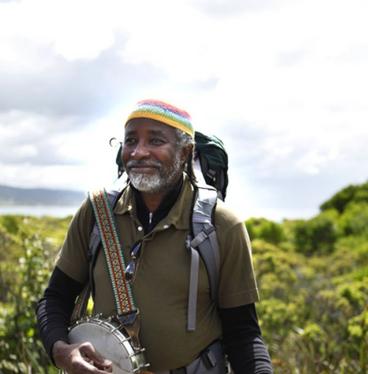 John Francis is an extraordinary human being.  He is best known as a “planet walker” – a term he uses to describe his advocacy on behalf of the environment.

Francis was born in Philadelphia and moved to California to attend college but dropped out.  After witnessing the effects of a catastrophic oil spill in the San Francisco Bay in 1971, Francis stopped riding in or driving motorized vehicles to express his support for the more ethical treatment and protection of the environment.  He walked wherever he needed to go for 22 years.

​One day he decided to stop talking for one day to become a better listener.  What started as an experiment for one day turned into 17 years of total silence.  He communicated by writing and through a makeshift

sign language.  He walked to Ashland, Oregon where he received his bachelor’s degree from Southern Oregon State College.  He wrote ahead to the University of Montana-Missoula, which accepted him into their graduate program in environmental studies.  After earning his Master’s degree and teaching classes through sign language, he walked to the University of Wisconsin – Madison (UW) where he wrote academic papers on dealing with oil spills.  He also earned a doctorate in land resources from the Gaylord Nelson Institute for Environmental Studies at UW.

Francis then walked to the East Coast of the United States where he served as a federal environmental analyst.  After the Exxon Valdez oil spill occurred in Alaska, Francis wrote regulations governing oil spill cleanup operations and oil transportation.  His work got him elected as a United Nations Environment Program’s Goodwill Ambassador to the World’s Grassroots Communities in 1991.

Francis has not just walked in North America.  He also sailed to Caribbean islands that he walked across before reaching the continent of South America.  Francis traversed  the length of South America via Venezuela, Brazil, Bolivia, Argentina, and Chile.  In 2014, he planetwalked in Hangzhou, China.

Francis’ activism by example has inspired likeminded activists.  On his walks, he has been joined by students, grassroots activists, international advocates, scientists, environmental practitioners, and local community members.  He continues to insist that “how we treat each other when we meet each other” should inform how we treat the environment.

Recently, he commented on the meaning of planetwalking: “The transformative power of walking is in the act, moving from where we are to where we want to be.”

Francis has a website, www.planetwalk.org, that contains information about his views on the environment and accounts from his awesome life.  He shares his introspective insights and wisdom in his book, Planet Walker.   Francis' TED talk is available below.