Coleman was born in Atlanta, Texas and raised in Waxahachie, TX where she obtained her primary school education.  At 18, she enrolled at Oklahoma Colored Agricultural and Normal University (now Langston University) but had to leave after one semester because she ran out of money.  After hearing about flying from returning World War I pilots, Coleman traveled to Paris, France, where she became the first African American woman to get a 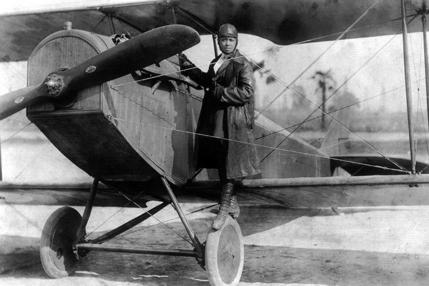 pilot’s license and an international aviation license in 1921.

When Coleman returned, she was a celebrity and went on a public speaking tour.  At the time, commercial airplane service did not exist.  Except in the armed forces, the only employed pilots were barnstormers who performed at exhibits for small audiences.  Coleman returned to Europe for more advanced training followed by a five-year stint as an exhibition flight performer.  “Queen Bess,” as she was called, was billed as the “world’s greatest woman flier.”

Even though Coleman did not live long enough to accomplish her dream of starting a pilot’s school for woman and Black pilots, B. Coleman Aviation, a fixed-base operator in Chicago, is named after her.  Roads are named in Coleman’s honor at four large international airports.  In 2006, Coleman was inducted into the National Aviation Hall of Fame, the most prestigious honor for pilots in the United States.  The U.S. Postal Service featured Coleman as part of its Black Heritage series stamps.

Lieutenant William Powell wrote of Coleman in his book Black Wings, “Because of Bessie Coleman, we have overcome that which was worse than racial barriers.  We have overcome the barriers within ourselves and dared to dream.”