managed a school prior to Coffey’s eponymous flight school).  Several of her students went on to become the Tuskegee Airmen (the first Black military pilots in combat action during World War II).  In 1938, Brown earned her pilot’s license and in 1939 she received her commercial license.

Brown founded the National Airmen’s Association of America in 1939 to increase the number of black pilots and aviation mechanics in the military.  Congress later allowed segregated participation in the Civilian Pilot Training Program and chose the Coffey School (and other schools) to help train African American aviators.

Brown was the first woman in the United States to have both a pilot’s license and mechanic’s license and the first African American officer to serve in the Illinois Civil Air Patrol.  After the Coffee School closed in 1945, Brown ran for Congress three times and taught in the public school system until her retirement. 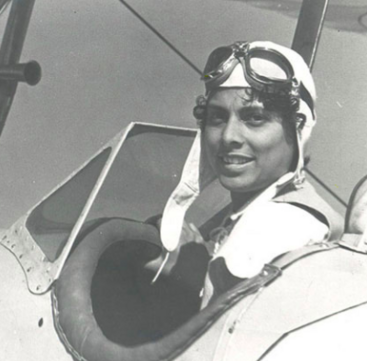 Brown was born in Glasgow, Kentucky.  She attended and graduated from Indiana State Teacher’s College and received her Master of Business Administration from Northwestern University.  She was employed as a high school teacher in Gary, IN but felt the need to make better use of her skills. ​

Brown learned to fly from Cornelius Coffey, a pilot instructor in Chicago, IL.  They later married and co-founded the Cornelius Coffey School of Aeronautics, becoming one of the first flight schools owned and run by African Americans in the United States (Coffee and John C. Robinson