Marshall Walter “Major” Taylor was the second African American to win a world championship in any sport.  He excelled as a cyclist and dominated the sport for over a decade.

When he was eight years old, Taylor moved in with a wealthy Indianapolis family who could afford many things that Taylor’s parents could not.  At 12, he received his first bicycle.  He became adept at tricks and was hired by a bike shop to perform for crowds wearing a military uniform (hence, the nickname “Major”).

At 15, Taylor broke the amateur track record at the 1-mile distance but his accomplishment was not recognized because of racism.  After winning his first race at 16, Taylor moved from Indianapolis, IN to Worcester, MA, which was then a center of bicycle manufacturing. 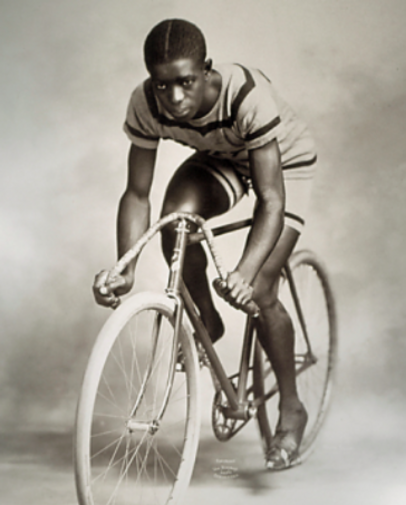 In 1902, Taylor competed in Europe, winning 40 of 52 races, including against the national champions of Germany, France, and England.  Taylor also competed in Australia and New Zealand.  Despite his international success, he was mistreated in the United States.  Taylor had ice water thrown at him during races, was physically assaulted and choked into unconsciousness on one occasion, had nails placed in front of his tires, and was boxed in by white cyclists trying to prevent him from sprinting to the finish line.  Taylor was often unable to compete in races against white cyclists in the southern United States.

Taylor never competed on the Sabbath because of his strong religious convictions.  He was quoted as saying, “It is my thought that clean living and a strict observance of the golden rule of true sportsmanship are foundation stones without which a championship structure cannot be built."

At 32, Taylor retired from competitive cycling because of the racism he endured.  Nevertheless, he remained resolute that African Americans could succeed in whatever field they choose, “[t]here are positively no mental, physical, or moral attainments too lofty for the Negro to accomplish if granted a fair and equal opportunity.”

Today, there are various cycling clubs throughout the United States named after Major Taylor in addition to several bike routes. For his success and example, the city of Worcester, MA named a street after Major Taylor.  Indianapolis named its bicycle track after Taylor.  He was posthumously inducted in the United States Bicycling Hall of Fame in 1989.  Taylor was also the subject of an Australian mini-series called Tracks of Glory.  In 1929, Taylor self-published his autobiography, The Fastest Bicycle Rider in the World.