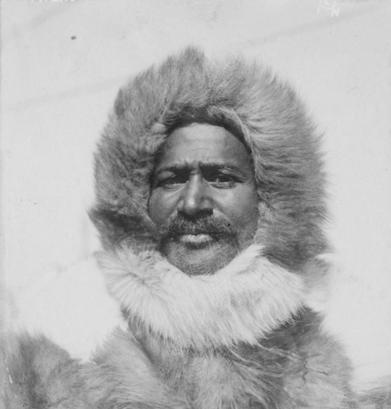 navigator and craftsman in addition to impromptu trader because of his language skills.

In 1909, Peary and Henson reported that they reached the geographic North Pole.  Their expedition included 39 adult Inuits, 10 children, 246 dogs, and 64 metric tons of whale meat.  Remarking about his accomplishment, Henson stated, "I think I'm the first man to sit on top of the world."

Because of his success with Peary, Henson was the first African American accepted as a member of The Explorers Club not to mention numerous other medals and honors.

Historically, African Americans faced serious challenges to adventure and exploration, such as slavery followed by exclusion from cross-ocean expeditions, lack of financial resources, and poor educational preparation.  For Henson to have achieved what he did prior to the end of Jim Crow is a testament to his phenomenal bravery and talent.

Henson died in New York in 1955.  His remains are interred at Arlington National Cemetery in Virginia.

Matthew Alexander Henson set an example before there was anything called black adventurers (or extreme sports period).  Henson was not just the first African American to reach the North Pole; he is reputed to be one of the first humans to reach that point.

Henson was born in 1866 in Nanjemoy, Maryland.  After his parents passed away, Henson received some education in Washington, DC while living with his uncle.  At 12, Henson became a cabin boy on the ship Katie Hines, where the captain taught him to read and write.

In 1887, Henson met Robert Peary and became his first mate, accompanying him on trips to the Arctic over the course of more than 20 years.  Along the way, Henson befriended and learned the language and the customs of the Inuit whom they visited on several expeditions.  Henson also learned how to build igloos and he trained dogs to propel a sled.  His acquisitiveness served Peary well; Henson served as a