On August 5, 1990, Pinkney set out to become one of the first African American sailors to sail solo around the world.  He chose one of the most difficult routes.  He sailed a 47-foot cutter named “Commitment” down the eastern coast of South America and then across the Atlantic Ocean to Cape Town, South Africa.  He then crossed the southern portion of the Indian Ocean to Hobart, Tasmania.  Pinkney then sailed across the southern part of the Pacific Ocean to the tip of South America before retracing his route along the eastern coast of North and South America to Massachusetts.

Pinkney's sailing boat nearly collided with a container ship that approached from behind on a major shipping route.  Near Tasmania, the sailing boat was knocked twice on its side before righting itself.

On June 9, 1992, William Pinkney (then 56) completed the circumnavigation by sailing into Charlestown Navy Yard in Boston, MA.  He was greeted by 1,000 school children and 100 officers from the National Park Service, the U.S. Navy, and the Coast Guard.  The greeters had followed Pinkney’s journey.

Pinkney’s sailing expedition covered 27,000 miles over 22 months.  Combos, an investment group based in Boston, MA, covered the trip’s costs ($1 million).  Pinkney’s journey differed from that of Teddy Seymour (also profiled on this site), the first African American to sail solo around the world, in that Pinkney went around the southern tips of Africa and South America.  Seymour traveled through the Suez Canal and the Panama Canal.  Pinkney may be the first person of African descent to circumnavigate the planet by the southernmost tips of Africa and South America.

When he finished, The New York Times reported about his positive, never-say-die attitude, “No matter who you are, where you are or what people say, you and your dreams are important and doable if you get a sound, basic education, if you are willing to work and never, never quit, and you take responsibility for making your dreams happen.”

In November, 1998, Pinkney completed a reverse Middle Passage route, sailing from Puerto Rico to Brazil and then east across the Atlantic Ocean to Ghana and Senegal.

Pinkney retired from ship captaincy in 2003 and authored his autobiography As Long As It Takes: Meeting the Challenge.  He received honorary degrees from Becker College, the Massachusetts Maritime Academy, and Southern Connecticut State University, not to mention recognition from President George H.W. Bush, Lord Mayor of Hobart, Tasmania, the Premier and President of Bermuda, and Senators Edward Kennedy, Paul Simon, and John Kerry, in addition to numerous awards from sailing clubs around the United States.  Pinkney’s accomplishment appeared in many national publications, including People, Sports Illustrated, National Geographic, Sail, and The New York Times.  Pinkney is a devoted grandfather and a motivational speaker. 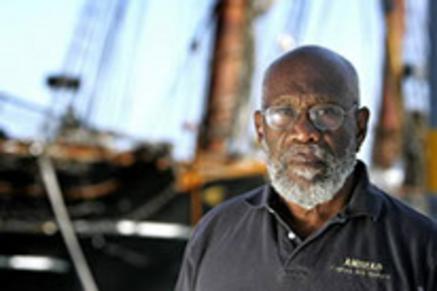 William Pinkney was born in 1935 in Chicago, IL.  He was raised in a single-parent household on welfare.  Pinkney attended Tilden Tech High School before being trained as an X-ray technician.  After leaving the Navy, Pinkney moved to Puerto Rico.  Between 1960 and 1980, Pinkney held a number of jobs, including as a professional limbo dancer, elevator operator, and product developer before joining the City of Chicago as a city executive.  He also learned how to sail.  In 1985, at the age of 50, Pinkney decided to sail around the world alone to inspire his grandchildren.