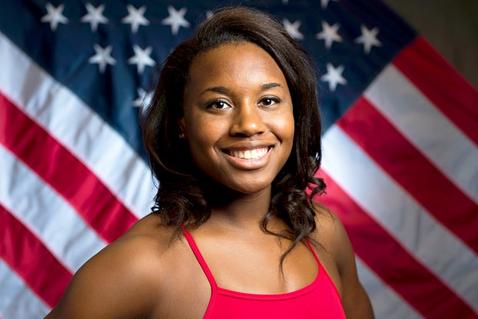 ​American teammates on the same American swim team at the same Olympics games, Lia Neal and Simone Manuel, for the first time.

Australia’s Cate Campbell was favored to win the 100m freestyle.  Despite starting strong, Manuel was behind at the halfway point but did not relent.  She surged forward to finish in 52.70 seconds (an Olympic and American record) and tied with Canadian Penny Oleksiak.  Manuel was astonished on seeing the “1” next to her name on the scoreboard.

After a medal ceremony, Manuel referenced former African Americans, Maritza Correia and Cullen Jones, who participated in Olympic swimming, “This medal is not just for me.  It is for some of the African Americans who have come before me.”

Commenting after the medal ceremony, Manuel expressed her desire that more African Americans participate in competitive swimming, “coming into the race, I tried to take the weight of the Black community off of my shoulders.  It is something I carry with me.  I want to be an inspiration, but I would like there to be a day when it is not ‘Simone the black swimmer.’”

Manuel’s comment elucidates her pride in being a role model and the hope that her success will be followed by more African American participation in competitive swimming.

“The title of black swimmer suggests that I am not supposed to win golds or break records, but that’s not true because I train hard and want to win just like everybody else.”

Manuel graduated from Stanford University with a degree in communications in 2018.

Simone Manuel is the first African American woman to win a gold medal in an individual swimming event at the Olympics.

Manuel was born in Sugarland, Texas.  She began swimming at age four.  Manuel distinguished herself in collegiate swimming by breaking Stanford University’s records in freestyle at 50, 100, and 200 yards.  In 2015, she was the NCAA champion in freestyle at 50 and 100 yards.

In 2016 at the Rio Games, there were two African