Teddy Seymour was the first African American to sail around the globe on his own.  Seymour was born in Yonkers, New York.  He attended Central State University in Wilberforce, Ohio on a track scholarship.  He also served in the U.S. Marine Corps for seven years, including in the Vietnam War.  Seymour then relocated to the U.S. Virgin Islands where he was a school teacher.  After deciding to sail around the globe, it took Seymour seven years to prepare.

Seymour made only 12 stops and accomplished the circumnavigation with very little money ($3,200 in cash and $2,000

on a credit card).  By his own account, his trip was a “no-frills circumnavigation of the world.”  While at sea, Seymour consumed beans, brown rice, and fish that he caught while sailing.

Seymour went first through the Panama Canal and crossed the Pacific and Indian Oceans before passing through the Suez Canal.  Along the way, he stopped in Yemen, Greece, Israel, Australia, and several South Pacific islands.  It took him only 16 months to cover 20,000 miles (89 miles per day on average).  Note that Seymour did not have any corporate sponsors nor was there much publicity about his trip.

In describing the individual tenacity and resourcefulness a solo sailor must have to overcome natural conditions, Seymour wrote, “‘Who Ya Gonna Call’ when you need Hercules?  When the boat is plunging into the surf?  When water and spilled diesel fuel had turned the deck into a skating platform?  When the boat has to be moored to the anchor and 300 feet of chain and 100 feet of rope hauled onboard without the use of a windlass?  When your back muscles are screaming for relief?  When your hand has been slashed by seizing wire?”  The ocean takes no prisoners; there is no mercy from squalls, hurricanes, or 20-foot waves on account of good behavior.  When conditions are rough, “[t]hings must get done and they do . . . or else.”

For his accomplishment, Seymour received the Golden Circle Award from the Joshua Slocum Society.  The Seamen’s Church Institute of New York and New Jersey held a special ceremony for Seymour.  The Virgin Islands Pace Road Runners club annually hosts a “Toast to the Captain” race in Seymour’s honor.  You may read three chapters in Teddy Seymour’s diary at http://www.bluemoment.com/teddyseymour/seymourstart.html?http&&&www.bluemoment.com/teddyseymour/content.html.

Seymour’s experience captures something that every person profiled on this site can appreciate: the richness of experiences acquired by attempting something unpredictable and seemingly impossible.  Seymour wrote, “When a person has sailed around the world; seen remote landscapes; shared time and thoughts with distant people; experienced high adventure; tasted the ultimate joy and the depths of despair, it is time to . . . do it again.” 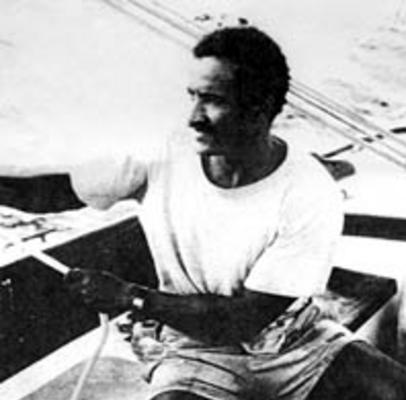