Slocum acquired the first boat he owned, Pato, in 1874 as partial payment for organizing the workforce that built a 150-ton steamer vessel.  The boat-building skills would come in handy when another boat wrecked while near Brazil.  Slocum hand built a 35-foot boat (described as a “canoe”), which he and his family sailed back to the United States.

By 1895, Slocum had worked on boats for more than three decades, frequently crossing the Pacific Ocean hauling and delivering cargo between the United States, Australia, the Philippines, and South America.  He had dreamed about sailing around the globe but been occupied with work in the shipping and boat delivery businesses.

Slocum rebuilt an oyster boat named Spray in Fairhaven, MA.  On April 24, 1895, Slocum left Boston, MA aiming to sail around the world alone.  Before departing from Boston, Slocum arranged for two publishers to stock the ship’s library with plenty of reading material to keep his mind busy on the long solo voyage.

He did not have the benefit of modern conveniences available to all sailors; there was no GPS navigation computers, diesel motors, sonar, ships that right themselves after the mast touches the ocean, satellite phones, internet access, or accurate sea floor maps.  Everything had to be done by hand - and by one person.  Slocum had to be resourceful, energetic, and hardy.  Slocum navigated by “dead reckoning,” for longitude and noon-sun sights for latitude.  His boat was capable of self-steering allowing him to sail on a steady course without touching the helm.

Slocum’s journey took three years.  He completed his voyage in 1898 when he sailed into Newport, Rhode Island after covering 46,000 miles.

Slocum was a correspondent for The San Francisco Bee and published several books about his travels, including Sailing Alone Around the World (1900), Voyage of the Destroyer from New York to Brazil (1894), and Voyage of the Liberdade (1890).  After the circumnavigation, Slocum spent the winters in the Caribbean and the summers traveling between New England ports living off his royalties from his bestseller book.

Slocum is thought to have lost his life while at sea around 1909.  He was pronounced legally dead in 1924.

Joshua Slocum was the first human being to sail alone around the world.

Slocum was born in Nova Scotia, Canada in 1844.  He learned to sail aboard schooners, which sailed between Port George and Cottage Cove.  Slocum’s father made leather boots for seamen and his grandfather was the keeper of the lighthouse.  After his mother passed away, Slocum joined a merchant ship traveling between Halifax and Dublin, Ireland.  He traveled to China, Indonesia, Hong Kong, Saigon, the Philippines, and the west coast of the United States.

In 1865, Slocum settled in San Francisco and became an American citizen.  He worked for a shipping company, transporting cargo between California and China, Australia, Japan, and the Malaku Islands.

While in Sydney, Australia, Slocum met and later married his wife, Virginia Albertina Walker.  Near Alaska, a storm cast the ship onto the rocks.  Despite not knowing how to swim, Slocum managed to save his wife, the crew, and most of the cargo.  To express their gratitude, Slocum's employer granted him command of the ship Constitution, which he sailed to Hawaii and Mexico. 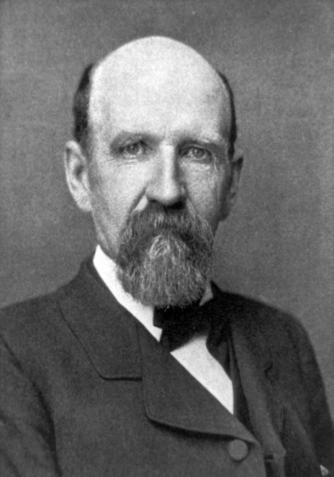 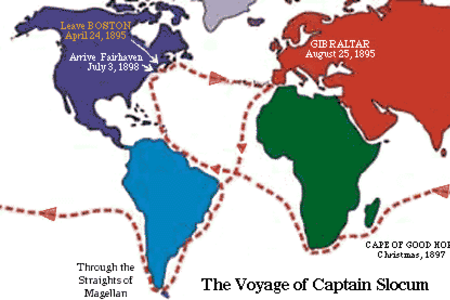